In 2013, Risha Lancaster co-founded Coffee4Craig, named after her late brother, in order to make life a little easier for those who, like her brother, found themselves on the streets. The initiative began with Risha and Hendrix Lancaster handing out coffees in Piccadilly Gardens, and has grown over the years into a drop-in service which provides hot meals, shower facilities and cold weather provision to the homeless, as well as advice, access to computers and phones and medical support.

In 2019, Risha applied to Queen Bee Coaching for free coaching as she wanted to  improve her time management, as well as her ability to manage and supervise staff and volunteers of the charity.  She told us:

‘”I entered into the coaching service with Queen Bee. I had sessions that I found incredibly useful. It was lovely to speak to someone outside of our sector and to gain knowledge, tips and validation from them.

We shared interests and were matched very well by Queen Bee Coaching. I enjoyed my sessions with the coach and was able to gleen many tips. She also was able to reassure me that the things I was worrying about were normal and that many other people worried about the same thing. She gave me tips and coping strategies and ways to look at things differently and ways to work differently.  I would highly recommend entering the coaching programme.” 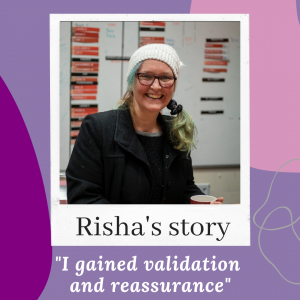